Trying something new this week. Posting three things that have caught my attention in the real world of the interwebs:

1. Failing to be creative

According to a Harvard Business School blog, the number one enemy of creativity is the fear of failure. An article that’s really worth a read, highlighting the need to understand the problem by creating data rather than a solution and post-rationalising it.

Failure is the best way of learning. Easy to say, harder to do, but best to give it a go.

It’s here. Facebook is introducing a “want” button, with the likes of Pottery Barn and Victoria’s Secret trialling. According to The Drum, this will help to create wishlists and boost e-commerce as a result. I’ve got a feeling it’ll turn into Pinterest and lead us to curate lists of things we’ll always aspire to but never necessarily own.

This week work took me to Frankfurt, specifically the Book Fair, however I spotted this rather striking statue in the airport whilst waiting to board my flight home. Did you know that Frankfurt used to be the largest airport in Europe? I did a tour of the airport during a school exchange many years ago. You can still do them. No, really. Click here to book yourself a place or even your child’s next birthday party. Imagine that.

Hopefully you’ll get to see this beaut: 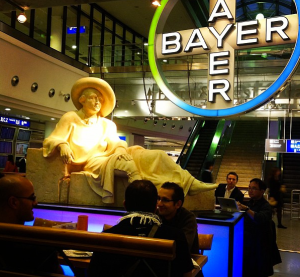